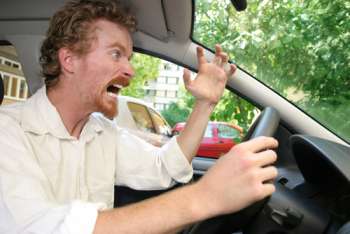 In no particular order, here are some random thoughts about cars, driving, and life on the road in general.

1.   In 2010, 50 officers were killed in traffic collisions, including 16 killed by a vehicle while they were outside of their vehicle, and many more injured. Many of these fatalities and injuries were caused by passing motorists inadvertently steering right into the scene of an accident or stopped police car.

2.   If God had wanted little dogs to ride in the front seat, He would have made seatbelts for them.

4.   Road rage is on the rise in India, where nearly 10 million cars, buses, trucks, scooters, and motorbikes take to the streets every day in New Delhi alone. [Link updated for 2016]

5.   New technology is here that allows you to receive and transmit Facebook status alerts and messages in your car. [This post was originally written in 2011; this seems impossibly quaint now.]

6.   Why do people (especially women) start talking on their cell phones while they are trying to back out in a busy parking lot?

7.   If you’re driving in Tenerife, the largest of the Canary Islands, you should be aware of one particular driving idiosyncrasy: If you’re behind a car and it suddenly indicates to turn left when there is no apparent left turn in the offing, it means that the driver is coming to a halt, to allow someone to cross or a car to pull out, for instance.

9.   Norway has the strictest drunk driving laws in Europe, only allowing .01 milligrams of alcohol per milliliter of blood, compared to .08 in most US states.

10.  New technology is on the way where cars will communicate with one another via WiFi to warn of impending dangers and collision threats, such as red light runners. [Again, looking at this post in 2017, this seems quaint.]

11.  Believe it or not, someone has invented a way to mount your iPad on your steering wheel (and has the chutzpah to claim it is not distracting at all). [Unfortunately, this page still exists, so it must be selling. God help us.]

12.  Nearly 80% of US drivers think they have better-than-average driving skills.