Anatomy of a Collision 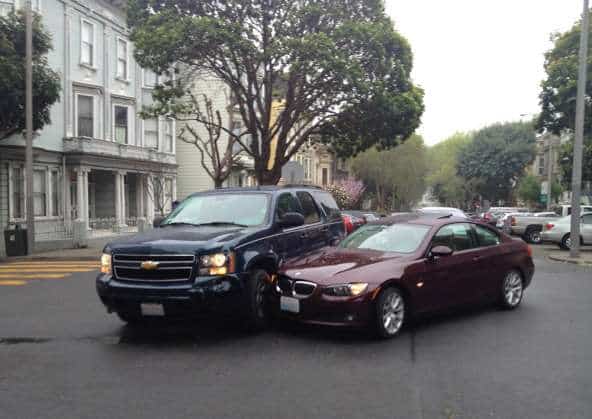 When one drives nearly 40,000 miles a year, it is often only a matter of time before the inevitable happens—an incident involving an unlicensed driver, bent metal, second-guessing, and a tricky car insurance situation.

In late January I was in my hometown of San Francisco on a work retreat. This beautiful city’s steep hills, difficult sightlines, gawking tourists, diverse population, and intense congestion make driving an act of pure faith at times. One curious aspect is that it has hundreds, if not thousands, of four-way-stop intersections in its residential areas.

Last Wednesday I was driving my BMW and I arrived at one of these intersections. I was chatting with a friend riding in the front passenger seat, and as I pulled up to a stop, I noted a dark blue Chevy Tahoe to my right. My impression was that I arrived a second or less before the Tahoe, and my last clear memory was of us both sitting stopped at our respective signs.

I proceeded first. We were in the middle of the intersection when both my passenger and I realized the Tahoe was heading straight for us—and he wasn’t slowing down. The moment was paradoxically both swift and slow-motion—a truly surreal sensation like in the movies. I lifted my foot off the throttle but had no time to brake as we both braced for impact. Meanwhile, the Tahoe driver had direct eye contact with my passenger, looking right at—or maybe through—him.

An SUV and a car are no match for each other, even at 10 mph. Tahoe wins, Bimmer loses. The point of impact was my right front corner and fender, but my entire hood was pushed up and backward. 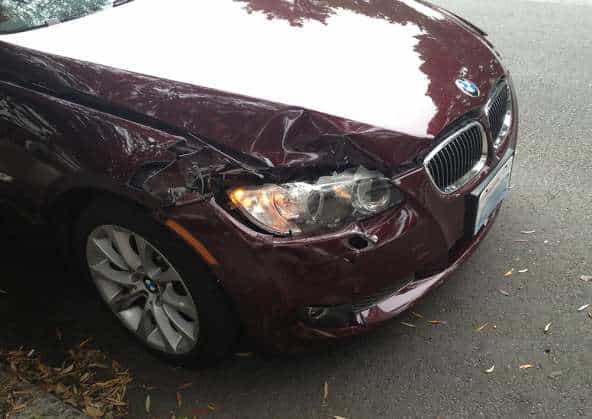 His damage was mainly to his left front bumper, a black plastic undercarriage piece, and a punctured washer fluid reservoir tank. No airbags went off in either vehicle.

A man driving by thrust a piece of paper into my hand with his name and phone number, offering to be a witness. A cop passing the scene inquired if anyone was hurt, but in California, police do not get involved unless there are injuries. We all said we were fine and he sped off. I snapped some pictures and then we pulled off to a safer place on the side of the street.

A woman and a beautiful toddler girl emerged from the Tahoe, and I asked repeatedly if anyone was hurt. Everyone said no, and the woman smiled sweetly. We each called our respective insurance companies and started gathering information. The Tahoe driver was Hispanic and knew very little English. Communication was going to be a problem. Fortunately, a pedestrian stopped to inquire what was going on, and he turned out to be bilingual, so he served as a translator.

The Tahoe driver was apparently the registered owner of the vehicle and had insurance, but he said he had no driver’s license. Immediately I wondered how one can obtain insurance without a license (but apparently certain kinds of Mexican ID are sufficient, although I don’t know if that was the case in our situation).

He also adamantly maintained he had had the right of way.

When repiecing an event, second-guessing and selective memory are constant banes. A four-way stop can be a tricky thing in itself. How many times have you come up to a four-way stop when other vehicles were present and made a quick judgment call as to who got there first, but you were distracted just enough to have your full cognitive attention clouded at that critical moment?

Then you proceed quickly, only to realize that someone else really had gotten there first but you didn’t actually see them, and it was rightfully their turn? How many times have you found yourself in this situation and “gotten away with it”?

It’s happened to all of us.

Naturally, I kept replaying in my mind what had happened. Was it possible it really had been this guy’s turn? The timing would have been very close indeed. We might have both arrived at the same time, in which case he would have had the right of way because he was on my right. Because I have an above-average interest in driving safety, I believe I pay above-average attention to these things. But I had been talking with my passenger at that moment. Could that have distracted me just enough?

Had the other driver been just as distracted with the woman and the toddler girl as I had been with my passenger and erred with the timing at the stop sign too? That could easily be the case. But we definitely had traveled into the intersection first. Why didn’t he see us? Why didn’t he stop or at least slow down?

He and my passenger were looking straight at each other the whole time. Did our presence not register until it was too late? Could he have even deliberately run into us with the intent of collecting insurance money? Some people make a living of sorts creating fraudulent claims. Or was he simply a bad driver, who, in spite of looking at us, didn’t actually see us until it was too late? As motorcyclists and bicyclists well know with vehicles, looking does not equate seeing—as in mentally registering.

I have studied enough cognitive science to know what an abject failure the human memory can be in these situations. I told my insurance adjuster what I knew and didn’t know. He spoke with the angry Tahoe driver, who threatened to take me to court if he was found at fault. With no traffic cameras or recorded info, it was rapidly dissolving into a “he said, she said” situation. Then my adjuster spoke with the witness who had given me his contact info. While he didn’t see who had stopped first at the intersection, he did confirm that we were already in the intersection when the Tahoe struck us. The insurance company ruled that the incident was not my fault.

At this point, the Tahoe driver went hopping mad and kept insisting to my insurance company his intent to sue me. I sincerely hope not to hear from him. I’m eternally grateful to the witness. My car remained in the autobody shop getting repaired to the tune of nearly $13,000. But the most important part is that no one was hurt in the least. Vehicles can always be fixed, humans not so easily.

Sometimes the most dangerous part about being in a collision is the way one drives afterward. Anyone who’s been in one can relate to the feeling that immediately following one, the world seems far more sinister, that everyone is out to get you. That can result in a hesitancy that’s equally dangerous and disruptive in an urban environment. It takes a while to get one’s self-confidence back.

But an incident like this is a good reminder of how important it is to be mindful every possible moment. And take your time at stop signs.