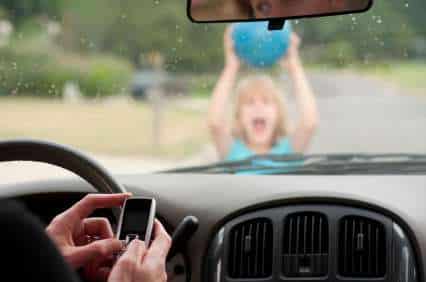 Last week, US news headlines were all atwitter after the National Transportation Safety Board (NTSB) recommended a nationwide ban on the use of all portable electronic devices while driving—including handsfree cell phones.

This announcement was sparked by the NTSB’s final report on a chain-reaction crash in August 2010 in Missouri that involved a pickup truck, a semi, and two school buses, resulting in two fatalities and 35 people injured. A number of factors contributed to this pileup, including road construction and driver fixation on another vehicle parked on the side of the road, but the incident was likely first triggered by a distracted 19-year-old who had been texting.

Phone records showed that he had sent or received 11 texts in 11 minutes just prior to the crash. Since he was among the fatalities, it will never be known if he was actually typing, reaching for his phone, or reading a message at the time of impact, but it was clear that he was cognitively and physically distracted enough that he didn’t see the semi that he rear-ended.

It deeply disturbs me that it’s taken this long for a national texting ban to even be considered in the United States, and it is a testament to how we don’t take driving safety seriously in this country. The vast majority of countries and provinces in Europe, the Middle East, Asia, and Canada prohibit the non-emergency driver use of handheld devices when operating a vehicle. And even stricter laws apply in Germany, the UK, Japan, and India, where even handsfree devices are forbidden.

Nearly 5,500 people were killed and 450,000 injured in 2009 on American roads in distraction-related crashes, according to the National Highway Traffic Safety Administration (NHTSA). While the causes of driver distraction include eating, adjusting the radio, and other activities, talking and texting on cell phones are the most alarming, partly because they involve such sustained cognitive, visual, and manual attention, and because so many more drivers are engaging in them than even a year ago.

Texting and other activities on portable electronics are increasing factors not just in automobile crashes but also in other modes of transportation. In 2008, 25 people died and 135 were injured (46 of them critically) when two trains collided in Los Angeles, with one of the conductors found to have been distracted by text messages he was sending while on duty. And who can forget the 2009 incident where two Northwest Airlines pilots overshot their destination by 150 miles because they lost track of time and location while using their laptops? 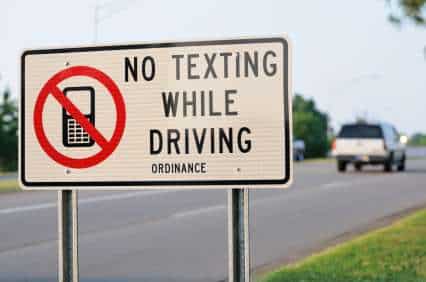 Even though 30 US states have legally banned texting while driving as of July 2010, the ban has done nothing to actually change our driving behavior. In fact, a NHTSA study shows that texting while driving has increased 50 percent from just a year ago (and many of us don’t need statistics to tell us that—it’s apparent from just looking at other drivers). Traffic safety officials universally agree that unless people feel that they are at risk of being literally stopped and fined for texting, they will continue to do so.

But from a law enforcement perspective, actually proving that someone was texting or sending an email message (as opposed to making a call or using GPS) and then stopping them for it is extremely difficult. And there are other legal obstacles; in Indiana, for instance, officers are legally not permitted to confiscate a cell phone from a driver to try to determine whether the motorist committed an illicit communications act.

The funny thing is, everyone I’ve ever talked to about this subject unanimously agrees that texting and talking on cell phones while driving is a bad thing, and yet they almost always admit to having done it at some point themselves. So why do we do it if we know it endangers ourselves and others? The answer lies deep in the heart of human psychology, and it involves feedback/reward/brain chemical cycles, addiction, overconfidence, self-discipline, decisionmaking, and our infinite ability to behave irrationally in the face of logic and irrefutable evidence.

I myself have never texted while driving, but I was one of those people who, even as recently as a couple of years ago, felt that I was an exception and could at least talk on the phone behind the wheel and still drive safely. But after some honest self-observation, I’ve realized that I absolutely cannot be as alert talking on a cell phone (even on Bluetooth) as when I’m not on a phone. (And for that matter, I’ve discovered how distracted I can be even when talking to a front-seat passenger.)

Many people are protesting the NTSB’s proposed ban on all handheld electronic devices, and perhaps rightly so. How is the technology usage defined? (Think about iPods.) Where does it end? (Current exceptions, even for the proposed ban, are made for in-car systems and GPS technologies, for instance.) Why is law enforcement allowed to still use their devices? Will the ban apply equally to commercial drivers (i.e., truckers and their CB radios)? How will it be enforced? What monitoring/privacy issues are at stake? Upcoming blog entries will further cover these controversies, as well as the ramifications of (and solutions to) other distractions, such as eating, drinking, fiddling with sound systems, conversing with passengers, fighting with kids, and operating buttons on the dashboard.

Anything that takes away from your direct visual and mental focus on the road can be potentially lethal, but I personally feel that texting in particular is the new DUI of our modern-day road life. The sustained cognitive and physical concentration required to maintain the activity, layered atop its addictive qualities, make it extra deadly—and irresistible.