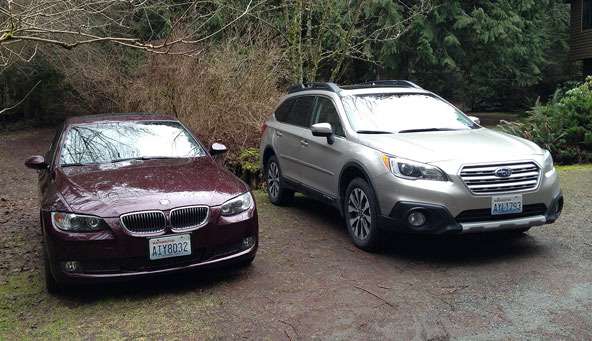 Most of you know that I’m the proud owner of a 2009 E90 335i. But you probably don’t know that I just published a major cookbook. And I’m going on book tour to promote it—for about 22 weeks, all around the country, covering around 50,000 miles—every year for the next three years.

Considering that my beloved Bimmer just hit over 100K, half of her trunk space is taken up by a donut tire (thanks to BMW’s absurd run-flat tire policy), and her reliability isn’t a sure thing anymore, all magic 8-ball signs pointed to a new vehicle in my future. Which one?

Unlike the 335i, this new ride needed to be total utility on wheels. It had to be spacious enough to haul 15 boxes of books and for me to still bed down in the back on occasion, plus have decent horsepower and AWD for struggling up, say, Idaho mountain passes in blizzards with those 600 pounds of books. Given the mileage I’d be driving, a crazy-long warranty was in order. And oh yes, decent fuel economy. Not too much to ask, right?

I quickly settled on a station wagon. And that’s how Nelly, a 2016 Subaru Outback, came into my world, delivered on a torrentially rainy day at a Seattle dealer in early December. She got her name when her cold engine surged one morning in my parking garage. Instinctively I murmured “Whoa, Nelly,” and it just fit. Nelly is the trusty, reliable bay mare who is always there for you and will never let you down. I can’t quite say the same of the 335i, which has had some spectacular on-road fuel injector and water pump failures. (She too has a nickname—PB&J—for she’s the hue of deep raspberry jam on the outside, with peanut-butter–colored leather inside.)

What I didn’t expect was just what kind of driver I’d become once I slid into Nelly’s left front seat.

Obviously, I didn’t expect an Outback to drive the same way as a Bimmer. For starters, Nelly has an automatic (actually a continuously variable) transmission, whereas PB has a manual 6-speed. Both cars have 6 very capable cylinders under their hoods, but Nelly’s Boxster boasts 256 horses, while PB’s inline pumps 300 ponies, with twin turbos for even more ass-kicking off the line. Both cars have AWD, albeit very differently engineered.

Right away some things became obvious. This Subaru is no WRX, and her seats are flatter and wider than Texas road-kill, designed for people three times my width. I never realized before what a sloppy sitter I’ve become in my tired middle age. With no side bolsters to hold me in place, I slump, slouch, and flop about like a limp baby in a high chair. My side mirrors are painstakingly adjusted, but I wouldn’t know it the way I end up leaning sometimes.

I’ve also had to get used to a pronounced floaty feeling—a sensation that I’m not quite connected to the car, or anything for that matter (the seats not holding me in place don’t help). The steering is not as loose as those 1980s Cadillacs you could steer lock to lock with a single finger, but it ain’t anything from Bavaria, either. Isolation lurks in everything, a refined muffledness. The engine is nicely zippy but rather lurchy, and the lack of a transmission shift only adds to the willing suspension of everything. While the brakes are adequate, they don’t inspire terrific confidence, either.

When the two cars are sitting side by side, PB looks like a low-rider next to Nelly’s hulking stance. Since their introduction in 1994, Outbacks have been growing taller, and these days they have nearly 9 inches of ground clearance. I love the possibility of perhaps not shredding the underside if I should encounter a surprise deer carcass on the Montana interstate at night, and her height is really handy for those massive Seattle potholes and the lakes within them when it rains hard. I do appreciate the extra visibility and thus feeling of invincibility; if Nelly and I face west on a clear day, I can just about see out to the Pacific. With her clearance and AWD, maybe we could cross it too, if I outfit her with water skis and drive fast enough.

The biggest difference between the two, however, is the presence of a large touch-screen in the Subaru. Here you can access the navigation and audio systems, vehicle information, cover art in your iPod, the weather forecast in Flagstaff, and even how your Apple stocks are doing. I’m no stranger to nice cars, but Nelly sports way more gadgetry than any vehicle I’ve ever owned. By and large, Subaru has done a good job with their user interface and voice-actuated systems, but heaps of things can still be fiddled with when the car is moving. 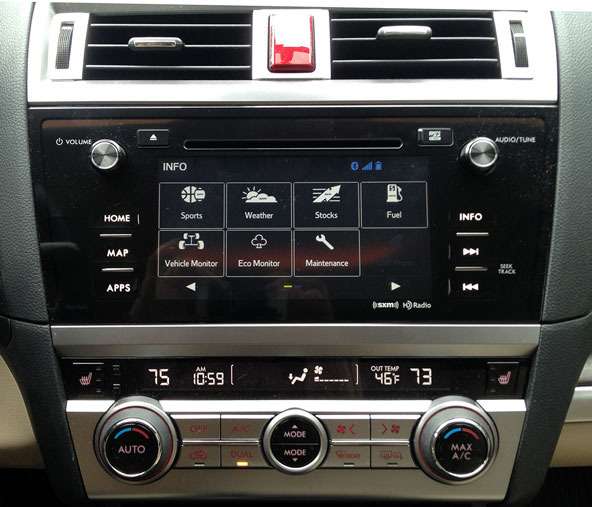 But never fear, because she also comes equipped with a slew of driver-assist technologies. I can set my cruise to maintain a specific following distance, even down to speeds of 25 mph (very nice in urban traffic, actually). Nelly will beep if she starts drifting out of her lane without a turn signal, if she senses I’m about to hit something or another vehicle is alongside me, or if I don’t move when the vehicle ahead goes forward. She can even steer me gently back into my lane if I nod off behind the wheel and apply emergency braking to prevent a collision. If in spite of all this I do manage to get into a pickle, her SOS feature can automatically call in the cavalry if I don’t respond within 10 seconds.

By contrast, the BMW is blissfully analog. No Sirius radio, no driver assist tech, no screens. Not even an automatic transmission, for God’s sake. If I need to use GPS, I just bring up Google Maps on my iPhone and listen to the audio instructions over the car speakers. PB’s seat securely surrounds my lazy body in just the right places, holding me in place like a confident lover. And without a doubt she’s the most athletic, finely balanced car I’ve ever driven, her steering meaty and hefty, going exactly where you point her. Acceleration is instant—she’s raring to go when you are, no questions asked. 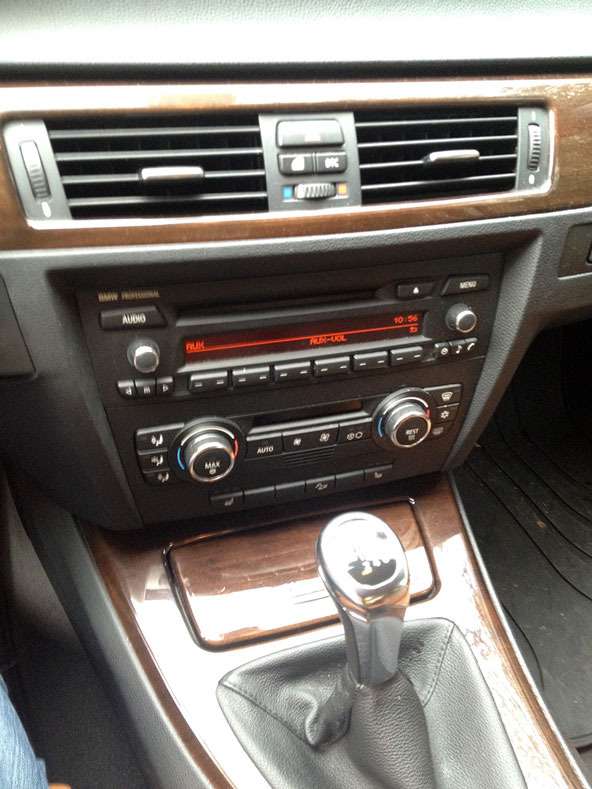 At the same time, if you need to de-accelerate, she’s exquisitely attuned to that too. Just let up on the throttle, and she responds instantly without fuss and repeated taps of the brake pedal. If you need to stop—even suddenly—she’s got you covered there too. Her surefootedness makes her first and foremost a driver’s car, giving the person behind the steering wheel tremendous feedback and confidence on what’s happening with the road surface and her path on it. And her response to your inputs rewards you with seductive pleasure, whether you’re just going around the block or across the country. If you’re a BMW owner, you know exactly what self-fulfilling loop I’m talking about.

For the first several weeks I drove Nelly, I felt paradoxically much less safe. Of course, getting to know a new car’s quirks takes a while. But as I slouched in my seat, that floaty, muffled feeling persisted. Normally a very confident driver, I became tentative as I maneuvered Nelly’s huge bulk through traffic. There was that damn screen, which I found myself looking at like a little TV (and away from the road) simply because it was there. And when I touched it and something didn’t work as expected, my driving swiftly deteriorated as I fought my desire (sometimes unsuccessfully) to figure out the problem while still in motion.

I noticed another funny thing. Because I was sitting up high, I was now able to see just how many people were texting or looking down at their phones while driving around me. This was happening just as much before, but when I was sitting lower in the Bimmer and more engaged in my own driving, I couldn’t observe that phenomenon so clearly. I was in no less danger than before, but seeing it from Nelly’s throne sure made me feel a lot more vulnerable now—and I noticed myself becoming more hesitant and paranoid in response.

A few weeks after Nelly’s arrival, I climbed into PB, and instantly I felt at home. Once I was securely strapped in, we were ready for adventure. I felt my pilot instincts shoot up the Alert-O-Meter in a joyful, ready way—toward overconfidence, even. It’s funny: As a driver, my skills and observational ability had not changed, but my attitude and perception, shaped by my vehicle’s environment and feedback, sure had.

It’s a powerful reminder of who we can become, chameleon-like, cloaked in our vehicles.

I’m guessing that many of you reading this post own and drive multiple vehicles. Have you noticed your attitude and skills as a driver changing as you switch out in them, even subtly? And if you’re confident that they don’t, take another honest look—it just might surprise you.

Two months and 5,500 miles later, Nelly and I are getting along quite well indeed. I’ve gotten used to her slightly wallowing ways, and I know she’s going to be a great road-trip car—as long as I keep PB around to remind me what it feels like to be a real driver.