Lane Hygiene, Part 1: On the Highway 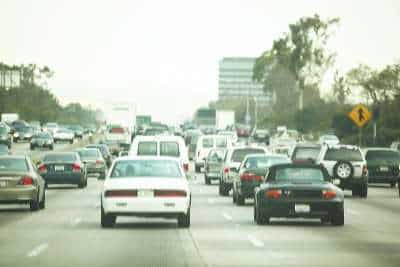 One problem I see constantly on the road are drivers not knowing how to smoothly and safely navigate their lanes. This is such a ubiquitous issue, one that involves safety, timing, traffic flow, road rage, constant near-misses, and accidents, that it warrants explanation on what the different lanes are for and how to drive in them. Lanes work differently for highway and urban city driving, and this rather long entry will cover highway usage, to be followed next time by city driving.

By highway usage, I mean roadways with speed limits of 55 mph or higher, and especially areas where there are more than two lanes of traffic going in the same direction. Most urban highways contain at least three, and sometimes up to six lanes, depending on congestion levels.

Most of us remember from driver’s ed that the right lane is for slower drivers and those exiting or merging, while the left lane is the “fast lane,” for passing only. The middle lane, if there is one, is often recommended by motorist handbooks for the smoothest driving. If there are only two lanes, then they recommend staying in the right lane only except to pass.

These are excellent guidelines that should be regularly heeded. But real-world driving is often messier than this, and to follow such rules rigidly sometimes also makes for difficult traffic flow. All drivers should practice what I call good lane hygiene—that is, being aware, cooperative, and not impeding traffic.

On many quieter parts of the interstate, there are often only two lanes in either direction. Slower vehicles (such as tractor-trailers, RVs, or vehicles pulling trailers) usually occupy the right lane. Faster-moving vehicles usually travel in the left lane, sometimes only for passing, and then they often move back into the slower-paced right lane. But sometimes there is so much traffic in the right lane that the faster vehicles never return back to the right lane and just continue to travel in the left lane. This also happens on many urban highways where congestion clogs up multiple right lanes and traffic naturally sorts itself out between faster- and slower-moving strings.

The trouble comes when people forget that the left lane is really meant to be a passing lane. In other words, you probably shouldn’t be in this lane unless you’re passing, period. Many states have signs to remind motorists of this fact.

Many drivers, having forgotten this and who are also not in the habit of being situationally aware, squat in oblivion in the left lane and profoundly annoy the people who are in fact trying to pass, causing long lines of traffic to bunch up behind them or faster traffic to attempt to pass on the right, which is considerably more dangerous. Other drivers exercise their self-righteousness, proclaiming that as long as they are doing the speed limit, they are justified in staying in the left lane and morally obligated to make other less law-abiding drivers do the same. 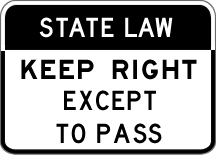 In this case, it is not your place to make other drivers obey speed limits; leave that for law enforcement and state patrol. Many states have statutes that make it illegal to fail to yield to traffic that seeks to overtake in the left lane, or to create any other “obstruction” in the passing lane that hinders the flow of traffic, regardless of the speed at which the motorist in the left lane is traveling. Many state patrol officers do not ticket for this because they’re helping stranded motorists or enforcing more dangerous infractions: speeders, drunk drivers, etc., but they acknowledge the traffic-flow and potential safety problems that left-lane squatters cause and they can legally ticket for this offense.

But what if the right lanes are congested, and traveling in the left seems to be a safer way to drive more smoothly and steadily, given the fact that it might be more dangerous and disruptive to constantly change lanes back and forth? I would say that in this real-world case, traveling longer distances in the left lane is perhaps permissible, but ONLY if you are constantly monitoring that you are not impeding the flow of traffic. In other words, you should be checking your rearview mirror constantly, at least every few seconds (and you should be routinely doing that anyway as part of safe driving), and move over promptly to the right to let traffic behind you continue unimpeded. And don’t get in the habit of regularly traveling in the left lane just because you want to be lazy. 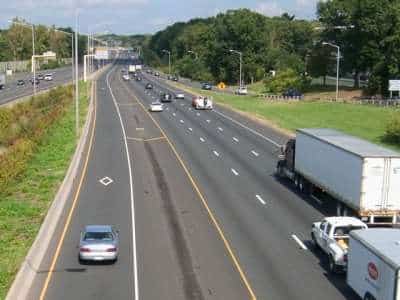 Example of carpool or HOV lane, with the diamond icon in the roadway. Photo taken over Interstate 91 in Connecticut. Source: en:User:Rhobite 10/1/2004.

Another type of lane is the carpool lane, or HOV (high-occupancy vehicle) lane. These are lanes (usually the far left but sometimes the far right) that are used by buses, carpools, and sometimes decaled electric vehicles and motorcycles on urban freeways that experience significant congestion during peak traffic hours (such as commuting times). Regulations vary, and you must pay attention to how and when you use these lanes. Most require only two passengers in the car (and no, pregnant women do not count as two people), but some require three or more. Some are considered HOV 24 hours a day, while others are HOV only at certain hours of the day but are unrestricted outside those times.

HOV lanes are not considered passing lanes, and single-occupant vehicles are never allowed to legally enter them to pass slower traffic. Confusion (and resulting annoyance) sometimes arises when carpool traffic of varying speeds use the far-left HOV lanes. Just as with non-HOV lanes, if you see that you are significantly impeding the flow of traffic, it is best to move over to the right to allow faster-moving vehicles to pass. 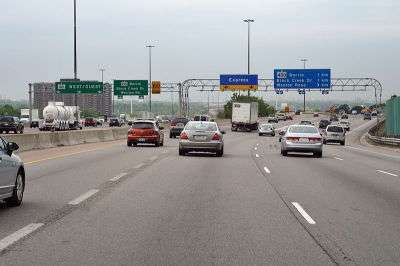 This is another type of lane that typically exists on urban highways where there is heavy traffic in certain directions at regular times. As an example, these lanes, which are often physically separated or barricaded from general-purpose lanes, open for one direction during the morning, then temporarily close, and then reopen for traffic traveling in the opposite direction in the afternoon. Typically express lanes have much more limited exit options than general-purpose roadways, so know that if you enter them that you may not be able to take your usual routes off them. Just as with regular highway lanes, these lanes may be open only for carpool and HOV traffic or for single-occupant vehicles. All the same passing rules as for regular highway lanes apply. 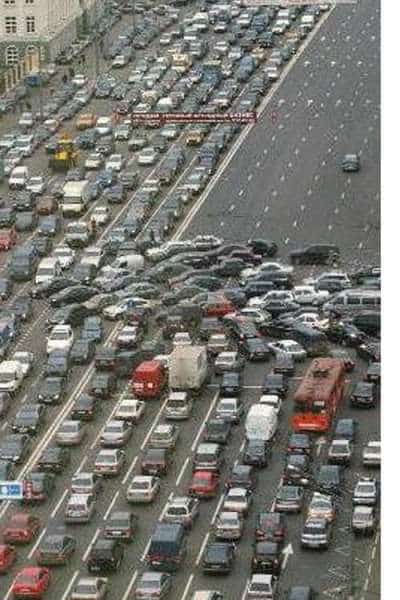 Not one of the best merges ever undertaken. Source: http://forums.vwvortex.com.

If I had one wish that I’d want drivers to follow, it would be to properly plan for merging drivers. In other words, if you don’t need to be in the right lane where you know a jillion (or even one) motorists are going to be merging onto the freeway, then don’t. Be nice and move over to the middle lanes and give the mergers plenty of room to join the flow of traffic. If you need to be in the right lane because you yourself are exiting, then anticipate for mergers by slowing down accordingly and giving them room. The idea here is to avoid unnecessary braking, which in turn impedes traffic flow; a single putting on of brakes may ripple backwards in traffic and trigger unnecessary slowdowns. But if you modulate your speed precisely enough to avoid applying your brakes, you will be doing traffic behind you a favor by causing it to adjust their speeds more smoothly in turn.

When you are merging onto highways and other high-speed roadways, it is very important to accelerate to a speed that matches what other traffic is going at the point at which you join it. This may be very counterintuitive and downright terrifying to new or inexperienced drivers (it was to me when I was in driver training), but few things will cause an accident quicker than if you crawl into fast-moving traffic too slowly or worse yet, stop suddenly before merging. Driving is an activity of assumption: Other drivers will assume that you will be merging onto a highway at a reasonably fast speed and will be watching out for you. It is your job to meet that expectation of traffic flow, and to be equally alert for any sudden slowdowns, lane changes, or acceleration of traffic in front or behind you. Take equal care to merge smoothly, not abruptly, into traffic.

In the next entry, I will cover how to drive smoothly in city traffic and what to watch for in different lanes in these more challenging environments.