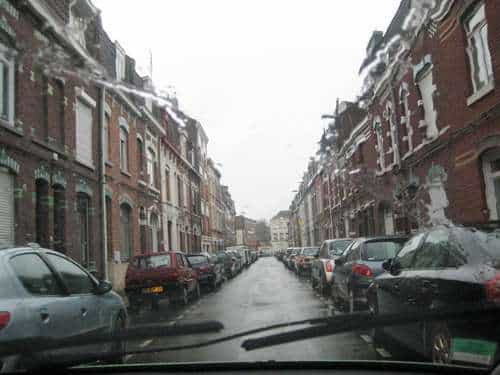 A typical street in Lille. No Navigators or Escalades allowed.

I just returned from an 11-day business trip to France, where I was able to get a glimpse of what roads, cars, driving, and transportation are like in a couple of European capitals. There is nothing like traveling to a different country to make one realize the advantages and drawbacks of one’s own land.

First off, Americans are used to having space, and plenty of it. In fact, the United States enjoys an embarrassment of riches when it comes to personal and public space. Because Europe’s infrastructure existed for centuries before the motorized vehicle came along, its city and country roads alike are extraordinarily narrow, even on the highways. There’s literally no room for error for the errant or distracted driver sharing the road with big transport trucks, and God help you if you’re not good at parallel parking on anorexic streets, or maneuvering in spaces tighter than Britney Spears’s jeans.

The little Fiat 500C, not available in the US.

In fact, there is a scale of economy that consistently runs through European living; houses are smaller, bathrooms are miniature, and cars are Lilliputian by American standards, often with efficient diesel engines. So much less waste and a more careful use of resources, especially with petrol being about 5 US dollars per liter (not gallon). It was refreshing to see very few SUVs (a Cadillac Escalade or Ford Excursion couldn’t even fit on many streets, let alone get into a parking garage). For any real distances in France, most people take trains everywhere—the French rail system has few rivals. In downtown Brussels, rows of bicycles were lined up on the streets, available for rent, vending-style. Effective, efficient public transportation—what a concept!

The majority of the cars are compact: tiny, cute hatchbacks that might be a little weird-looking to Americans, especially the French Citroens, Renaults, and Peugeots, which are very much alive and well in France. At nighttime, the residential areas in Lille were crammed with these vehicles in every nook and cranny, parked on sidewalks, up curbs, double-parked, and in every conceivable spot one could imagine, like a plague of metal locusts.

You never know what you might find in a Parisian garage. Ferraris and Cadillacs living in sin.

I noticed regional differences. In notoriously congested Paris, many get around on motorcycles and scooters, which careen quite recklessly between highway lanes and weave about on city streets among streams of cars and pedestrians. In cosmopolitan Brussels where many European Union bigwigs live, larger BMWs, Mercedes, and Audis are more common. In flashy Paris, if you’re someone with a lot of bucks, you might flaunt it with a Bentley, Rolls Royce, Aston-Martin, Ferrari—or a Mustang. A visit to an upscale Parisian parking garage revealed lots of fun goodies, including some 1950s and ‘60s classic American muscle cars. 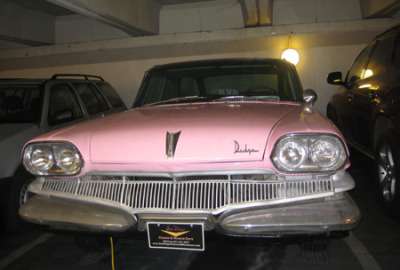 Another unexpected find in the bowels of Paris: a pink Dodge.

The most refreshing thing about European roads was seeing that people, for the most part, actually know how to drive. A French native told me that over 95 percent of vehicles in France are stick-shift. Automatic transmissions are starting to be an option on some cars, but she herself has never seen one there. One person I rode with in Paris thinks having to drive a manual really keeps your concentration on the actual task of driving, since you are constantly engaged with the throttle, shifter, and clutch. “Americans just sit in their seat and think that’s all they have to do,” he grinned. Think about it—it’s a whole lot harder to eat a sandwich or hold a cell phone if you have to steer and shift too. 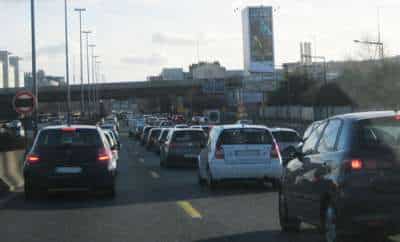 Here, the passing lane means just that—a lane for passing, not just for getting around slower vehicles and then planting yourself absent-mindedly like a road potato. Drivers are not shy about flashing their brights at dimwits who didn’t quite get the message. A rule of the road is to never pass on the right, and if you do, you will hear about it. When there is congestion up ahead and you are the last car to slow down behind the backup, you put on your hazard flashers to alert the vehicle behind you. 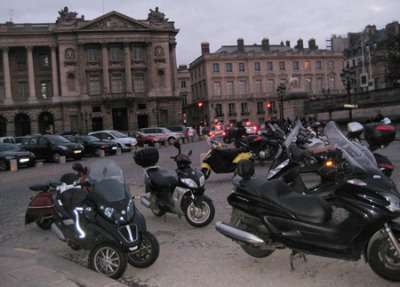 Alternate forms of transportation in Paris.

In general, European drivers seemed quite courteous, and much more aware of traffic around them than typical American counterparts. In the whole time I was there I saw only one crash, and it was a bad one: a thoroughly crushed car had flipped over onto its roof on a wet highway at night. Still, this was nothing compared to Seattle, where I might easily see several such accidents in a single day.