Part 2: Anatomy of a Drug Stop with the WSP 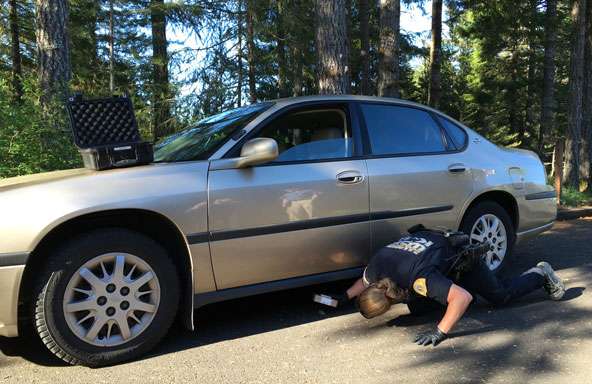 A few weeks later, I returned to the Washington State Patrol Training Academy for a very different kind of scenario—the drug stop. This script and setup were elaborate, intending to show cadets both how a drug-sniffing dog works and the legal complexities of such a stop. For this reason, instead of FTOs, district attorneys and other legal professionals were on hand to coach the cadets, as they are the ones that intimately know exactly what causes legal cases to fall apart. If an officer misses documenting a single fact on their paperwork, fails to read the civilian their rights, or forgets even a minor step, that can mean the difference of someone being prosecuted for a DUI or the entire case being thrown out of court with the help of a sharp-eyed defense attorney.

In this scenario, another woman and I are on our way to eastern Washington, where she is going to teach me how to cook meth. She is a long-time dealer and already has a warrant out for her arrest, whereas I have no prior record, and I’m the registered owner and driver of our vehicle. Our drug paraphernalia is in a backpack tossed in the back seat, and a K-9 officer has already hidden a small packet of cocaine under our car for her dog to find.

We are stopped for not wearing seatbelts, but of course my companion is arrested as soon as they run her license and see her outstanding warrant. In this case, two cadets are on hand, which is useful for both questioning people separately and officer safety. As my friend is getting put in handcuffs, one officer asks her how we know each other, and my friend declares we’re old childhood friends. Since she’s already in trouble and has nothing to lose, she’s doing everything to throw me under the bus, even offering to cut a deal with the officers for her cooperation. Meanwhile, I’m telling the other officer that we just met that morning in Seattle in the line at Starbucks, and she needed a ride to Ellensburg and I just happened to be going that way. People lie and snitch on each other constantly in these situations, and it’s up to the officers to try to tease out what is actually happening through separate, careful questioning.

Asked about the bag in the backseat, I tell my questioning officer it’s hers, not mine, and that I don’t know anything about its contents, since I just met her that morning and I’m giving her a ride. He then asks if I’d consent to him searching the inside of the car and its trunk. I tell him no. He then asks if I’d allow a drug-sniffing dog to check out the car. I say sure, the cute dog can come, but I won’t allow an officer to search the inside of the vehicle. I then explain that my pot-smoking brother sometimes uses the car and there maybe a joint or two leftover in the vehicle that the dog might find, but it shouldn’t be anything more than the legal limit allowed (one ounce).

There are a couple reasons for this setup: One is that consent must be obtained for each part of the vehicle. You can tell an officer that s/he can search the inside of the vehicle, but not the trunk, or vice versa. You may wonder about probable cause, but remember that I have no record and I’m the legal registered owner of the car. They have, however, arrested my friend who does have a prior history, so they strongly suspect that the backpack in the backseat (which I‘m saying is hers) has drugs in it. But without proper consent to search and no apparent signs of my driving under the influence, they are helpless to take further action. If I had said no to the dog sniffing the car, they would have had no choice but to let me go (but retaining my friend, of course).

Another point to remember is that marijuana was legalized in Washington State in 2012. I try to cover myself by saying that the car might have weed in it in case the dog finds something, but it also makes a difference for the officers documenting the case. Prior to 2012, all Washington State K-9 units were trained to find heroin, meth, marijuana, and powder and crystal forms of cocaine, but starting in 2013, marijuana was dropped from that list. That means, however, that a mix of dogs is still working, and the dogs cannot alert their handlers as to what kind of or amount of drug they have found; so an older dog might alert for a legal amount of marijuana. Both dogs and their handlers have curricula vitae (CVs), showing their training qualifications, which must be noted by the officer at the scene; omission of such details can strengthen a defense attorney’s case.

Once I have given consent for the car to be searched by the dog, the cadet has to read me my rights and ask me to sign a paper form that I’d been read them. This step is crucial; forgetting it can jeopardize the entire case, right down to actual wording of my rights. 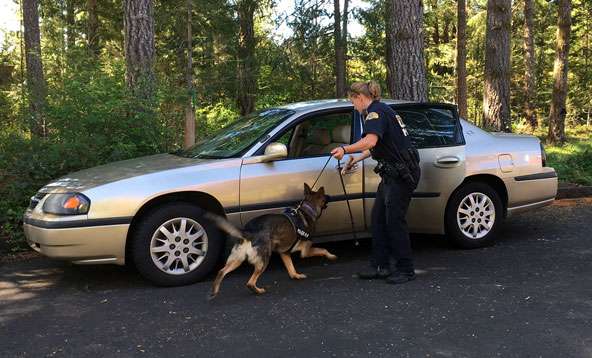 Piper is our heroine for the day, a beautiful and very energetic German Shepherd on a mission—to find drugs and play with her chew rope as a reward. Once she is released, she quickly circles the car, sniffing crazily. Within seconds she has found the cocaine that her handler had hidden on the underside of our Impala. She is also ready to bound inside the car, leap over the front seats, and check out that backpack. K-9 dogs are trained to either paw at or lie down when they find what they are looking for (an important consideration especially when sniffing out a potential bomb—disturbing it could be deadly).

Once Piper finds our drugs, my friend and I are both done for. My companion was handcuffed long ago and placed in the patrol car, but I’ve been allowed to stand outside unrestrained. The cadets and legal staff discuss other evidence that can be used. It’s generally better to keep people separated because catfights have been known to break out in the back of a squad car, but since a camera is running continuously inside the car, everything being said is being recorded, which can be pretty damning just in itself. 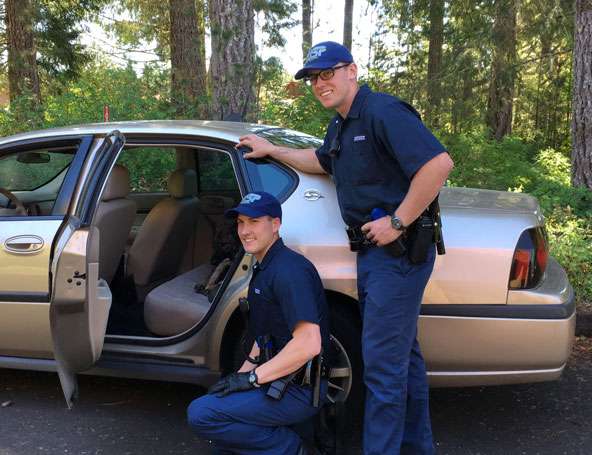 I’d never want to be a police officer in a thousand years. Given the prevalence of guns, drugs, aggressive behavior, and increasing volatility of people under the influence of both legal and illicit substances, the mantra of “there is no such thing as a routine traffic stop” has never been more true. Every stop has the potential to be dangerous. Participating in these training sessions has revealed how vulnerable the officers can be at every juncture. Even the act of reaching into the glove box during a nighttime stop to get my registration papers could mean sudden death for an officer if I decide to pull out a weapon. On the other hand, as an FTO told me, “You can’t live your life in fear or you’d never be able to go out there.”

From this experience, my perception of police officers has really changed. I’ve actually been stopped far more times for speeding than I care to recount (which may be surprising for a traffic safety advocate, but that too has shaped my interest in this field), and while the vast majority of the officers I’ve encountered have been impeccably professional, there have been a few notable exceptions. Sometimes our personal interaction with law enforcement, coupled by media coverage, leads to adversarial perceptions, of an “us versus them” mentality.

This unique opportunity to volunteer and witness how officers are being trained opens the door to seeing situations from an officer’s perspective, and also ask questions of why they are trained the way they are and offer input. More than ever we are living in a time where law enforcement and community need to forge strong, healthy relationships based on empathy and collaboration, not division and fear. To inquire about volunteering, contact the Washington State Patrol Academy at http://www.wsp.wa.gov/employment/academy.htm, email them at [email protected], or call them at 360-432-7500.