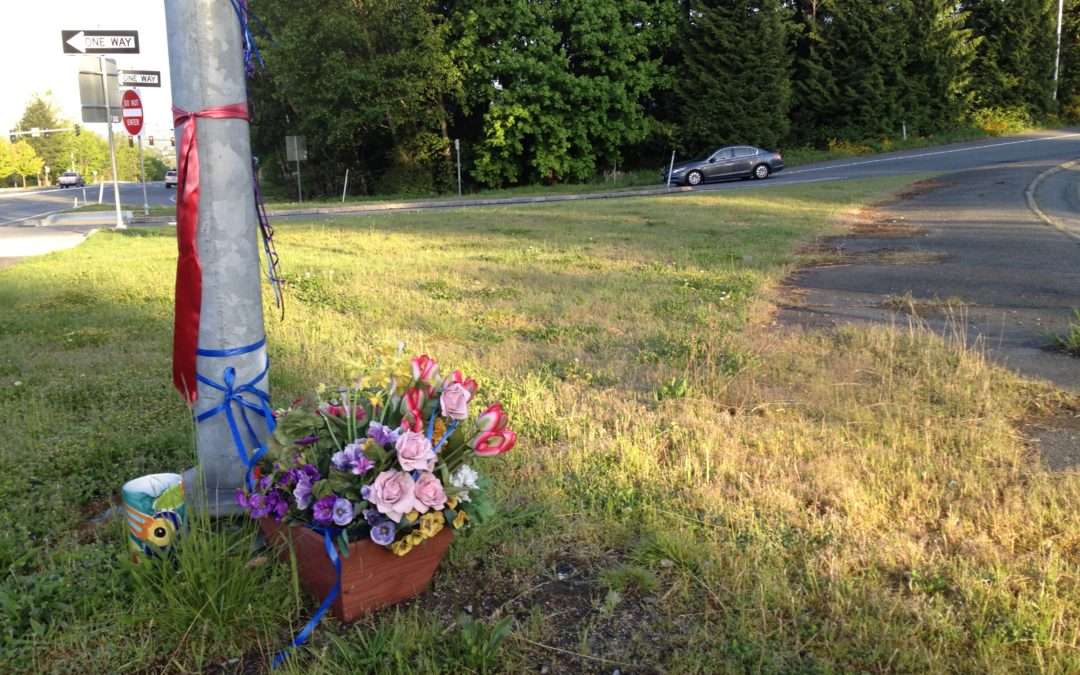 The flowers placed by the Ramp Metered Ahead When Flashing sign near the onramp still haven’t wilted yet. Day after day, their silk petals flutter in the rain, wind, and sun, as out of place as a kitten on an ice skating rink.

Every time I see them, I inhale deeply for a man who no longer can.

Almost ten months ago, this man was driving his silver BMW M3 sedan westbound in the Seattle suburb of Kirkland on a beautiful summer day. A famous Google software engineer who had just celebrated his 10th wedding anniversary, he was returning home from Costco when a black Hyundai SUV hurtled from out of nowhere and slammed into his car. He died instantly.

I came upon the scene perhaps about a half hour after it happened. I was on a routine trip to pick up my dad and we were on our way to downtown Kirkland, but the road was blocked, forcing us to enter the freeway onramp. Weaving through the disorienting maze of emergency vehicles, flares, and police officers waving the crawling traffic by, I suddenly found myself about five feet from the silver M3.

It was mangled so badly that its driver side was smashed clear into the passenger area and the whole car was squished to less than half its original width. My heart sank. My first thought was that no driver could have possibly survived that kind of impact. My second thought was what kind of speed had to be attained to inflict that much damage, and how? The 30-mph speed limit of the surrounding streets made this improbable, even taking into account normal traffic fluctuations.

The Washington State Patrol later determined that the SUV driver had been traveling southbound on the freeway when he perceived that another driver cut him off. Fueled by a blood alcohol level four times the legal limit, the Hyundai driver flew into a rage and started pursuing the vehicle. He exited the freeway on the eastbound 85th St offramp at high speed, lost control around a corner, crossed three eastbound lanes, hit a raised median, rolled his vehicle, and sailed across all the westbound lanes before slamming into the top of the BMW.

The drunk driver walked away from the SUV. The dead man left behind a devoted wife and two young children. The person being pursued by the drunk driver continued on the freeway and likely never even knew what happened.

Seeing the BMW shook me up terribly the rest of the day—it was so clearly a case of being literally at the wrong place at the wrong time. It wasn’t until the next day that it dawned on me that I had been running about 15 minutes late that day, all day. I’d been a little irritated at my tardiness when I picked up my dad, having come down southbound on the freeway, not my usual route but necessary that day because of an errand. I had exited eastbound on that same offramp to 85th Street, only to return westbound with my father in the front passenger seat 10 minutes later. If I’d been running on time—my usual time—the Hyundai would have been 10 minutes behind me on the freeway, and we could have been that BMW.

No words can describe the unfairness of fate, when reckless impulse, inattention, alcohol, and road rage intersect in a single horrifying moment. Still, the silk flowers brave the ceaseless elements, their presence a reminder of randomness.