Singing on the Ice 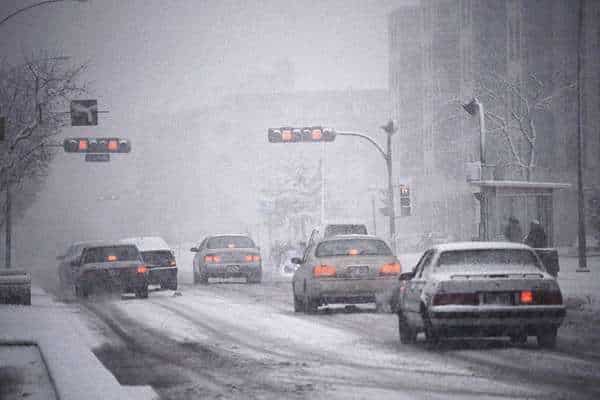 These winter days can be extremely treacherous ones on the road, what with sleet, black ice, freezing rain, drifting snow, whiteouts, or any combination thereof blanketing the pavement. Starting in late fall every year, reminders pop up on the radio and news for drivers to be mindful of changing conditions, to slow down, and allow extra travel time. The Internet is suddenly peppered with articles on how to drive in snowy conditions, to steer into or out of a skid, and how to winterize your car.

During 13 years of living in Wisconsin and Minnesota, I learned to drive on snow and ice and everything nasty in between. I’ve plowed through blizzards on the Interstate and rushed to catch planes in windy winter conditions where the slightest quick move would have sent me fishtailing into the ditch along with the 14 other hapless vehicles I saw along the way. I’ve crawled home a hundred miles in black ice at night and waited out whiteout conditions under the shelter of overpasses. But the most valuable winter driving skill I ever learned was something I discovered totally by surprise a couple of years ago.

It was on an epic cross-country trek between Seattle and Wisconsin when I ran into an unexpected snowstorm in an Idaho mountain pass. Thick white flakes were swirling about and visibility was rapidly worsening. I was gingerly crawling past semi-trailer trucks to recover the space cushion between us as we shared lanes partially obscured in snow. As the trucks slowed up near the summit, I struggled to keep enough momentum to not lose total traction myself. It became apparent that conditions were really not safe to drive in, and yet it was far too dangerous to pull off to the side of the road because no good clear spot existed, nor could drivers be counted on to see a stopped vehicle, which in itself was a greater hazard. So I just had to keep going.

My heart rate was up and I was starting to feel adrenalin overloading my jittery body. A tension headache had oozed out of my knotted shoulders and seeped upward, settling painfully behind my eyes. Just out of habit, I switched on my iPod to an operatic Barbra Streisand song, and reflexively began to sing along. To my complete surprise, I discovered that I’d been holding my breath. For how long I had no idea, but as I sang I realized that the very act of deeply inhaling and exhaling to hold the notes made me instantly relax, just enough to take the edge off this supreme tension and soothe me. I loosened my death grip on the steering wheel (which again I’d had no idea I’d been doing), and as I sang, my conscious mind had somewhere to go other than whipping itself into a total frenzy of anxiety. This was the best thing I could have possibly done at this moment.

Since then, I’ve come to realize that breathing properly is truly essential to good driving. This may sound a bit crazy, but think about it: If you’re holding your breath (and many of us do it all the time without being aware of it), then you’re not taking in oxygen. If you don’t get enough oxygen to your brain, you can’t think. And if you can’t think, then you won’t have the reflexes to respond properly to outside stimuli.

Professional racecar drivers profoundly know the value of breathing and relaxing. A driving coach once told me that he has gotten in the habit of taking a quick breath right before entering a freeway onramp, to ready himself. Since that Idaho snowstorm, I’ve taken to regularly singing Broadway and opera tunes in times of stressful driving, and it never fails to help. Deep breathing (whether by singing or just practicing the breathing) is definitely a safety technique that I believe should be right up there with winterizing your car and putting on your seatbelt.