Fun in the Snow—and the Value of Winter Tires 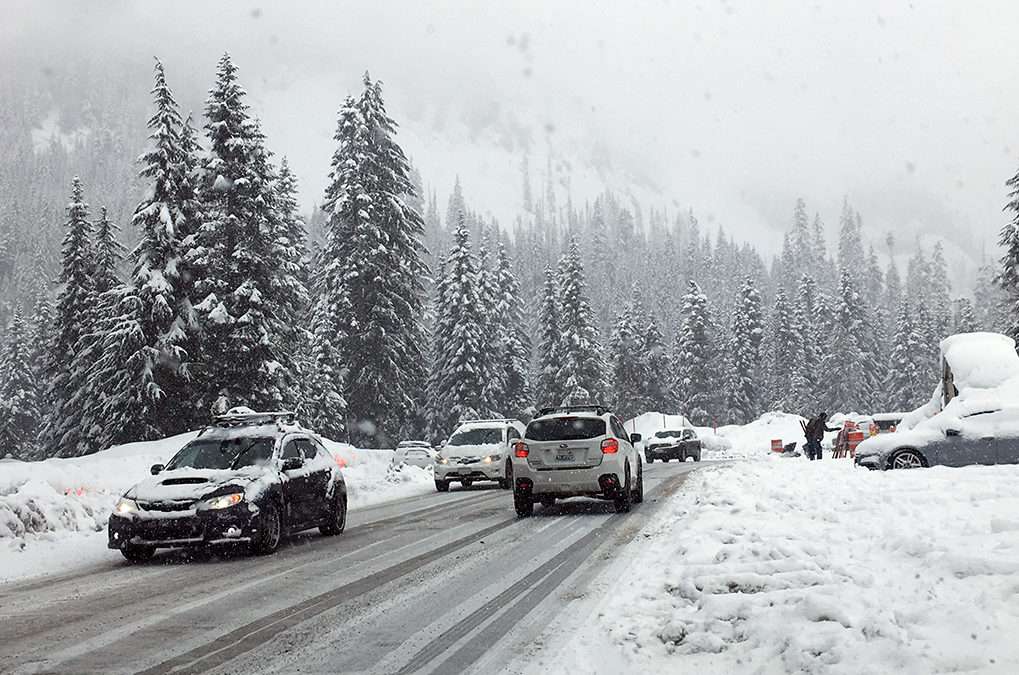 Where I live is an amazing place.

Sure, here in Seattle, it rains a lot. In December and January, it’s easier to count the few days (or hours) when the sun shines than tally up the ones where no moisture falls from the sky. But an hour’s drive east transports you from a bustling, maritime city with saltwater tang and seagull cries to honest-to-God mountains with bears, cougars, and an awe-inspiring winter wonderland.

It’s also a fantastic place to try out winter tires and see what your car can do in the snow.

Some of you are rolling your eyes now—those who live in the Midwest, East, or the northern Plains states where winter is a far more serious business. I lived in Wisconsin and Minnesota for nearly 13 years, so I’ve endured firsthand plenty of below-zero wind chills and back-wearying shoveling. And I don’t miss them one bit.

But, ironically, I never put winter tires on my cars when I lived there—I simply had never heard of them and no one I knew ever talked about putting them on their vehicles.

Years ago, a Minnesota friend and I went on a road trip from her hometown of Winona to San Francisco, and she was puzzled by the chain-up signs along the interstate mountain passes. Having spent all her life on relatively flat roads, she had never even heard of tire chains and found it difficult to conceptualize why one would even need them. But, there’s nothing like a steep slope (or even a slight incline) to very quickly translate the physics of traction and momentum into seriously not going or stopping.

Ironically, even though I now live in a place that doesn’t get much snowfall, I put winter tires on both my BMW and Subaru, simply because Seattle’s steep hills can be quite tricky when there’s a hint of ice or even a mere inch of snow coating them. (Not to mention our overconfident, inexperienced drivers, who pose a much worse hazard than the weather itself.) And I continue to regularly drive cross-country in the winter to Wisconsin every year, when road conditions vary from white-out to slick ice. Even if you have AWD, the single best way to increase your winter safety (other than not drive like a maniac) is to give your vehicle proper winter shoes. In fact, it’s been shown that a front-wheel-drive car, when outfitted with winter tires, can outperform on snow a comparable AWD or 4WD vehicle with regular all-season tires.

Winter or snow tires significantly increase your grip and stopping distance because they’re made of compounds that stay softer and more flexible in temperatures below 40 degrees Fahrenheit, plus they have a different tread pattern that “bites” into snow and ice. Yes, it costs extra to buy two sets of tires (it’s best not to keep them on after spring), but since you use them only part of the year, they last twice as long. Besides, there’s not a price you can—or should—put on your or other people’s safety. It can truly mean the difference between sliding through that slippery intersection (and into another vehicle or pedestrian) and stopping safely before it.

Over the years, I’ve tried many winter tires, like the Bridgestone Blizzak, Michelin X-Ice, and Altimax Arctic. They’ve all been excellent, but when I read a Car and Driver article a few years ago that compared six top winter tires, I was intrigued by the winner—the Nokian Hakkapeliitta. Nokian is a Finnish company that specializes in winter tires for both commercial and passenger vehicles, and that specialization really shows (including a world record of a tractor driven at nearly 81 mph). The C&D article warned that the Hakkapeliittas were quite expensive, but I had an automotive fantasy now—and was going to save up my dimes.

My fantasy finally came true last Friday afternoon when Nelly the Outback got shod in a set of nonstudded SUV 8s for the very reasonable price of $152 each at Discount Tire. Since Nelly is a fairly recent addition to our family, I’ve been wanting to put her through her paces in the snow to see how she’d behave, stop, go, climb, and steer. It just so happened that over the weekend, a winter storm advisory was in effect for the East Cascade Mountains, with 8 to 10 inches set to fall in 24 hours. I decided to head to Snoqualmie Pass before things got too dicey (read: before the State Patrol shuts down I-90 at the summit because too many vehicles—including semis—are crashing in the slippery conditions; this happens regularly).

Snoqualmie Pass’s summit elevation is only 5,420 feet, but it more than makes up for its paltry height by an average annual snowfall of 434 inches, making it a favorite with skiers and snowboarders both novice and experienced. WSDOT does an amazing job of clearing the Interstate roads as quickly as possible, so I hoped to find some side roads with adequate snow cover. Fortunately, nearby Alpental did not disappoint. Here, even some of the enormous homes that are rented out year-round to visitors were nearly buried in the white stuff. Words can’t describe the scene—even pictures barely do the job.

An Alpental home. Note the structure to keep the fire hydrants findable—critical in a place that can get over 40 feet of snow in the winter. 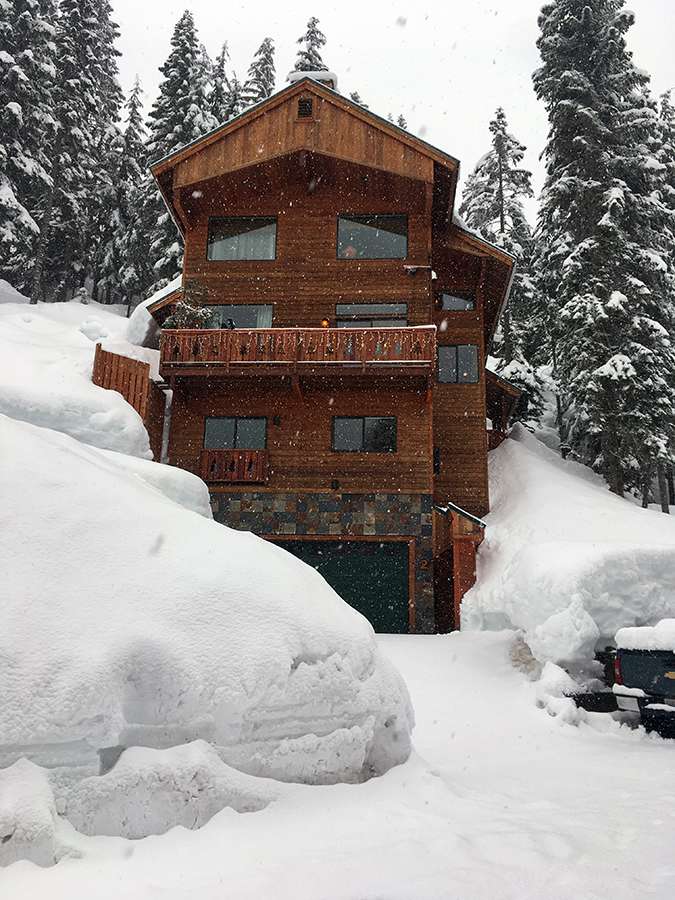 It was snowing lightly and about 3 to 5 inches covered the roads, with not much ice underneath. While I couldn’t build up much speed on the narrower streets because of traffic and the possibility of people coming out of driveways, I did find a wider deserted street with a long straightaway where I could practice activating the antilock brakes (ABS) to simulate emergency stops. Best of all, it had a huge cul-de-sac with deeper snow where Nelly and I could safely spin, skid, and do donuts.

The result? Almost a ho-hum nonevent. Braking? Incredibly short. Accelerate from a standstill on a hill? No problem. Gun it on a hill? What more do you want? Nelly sighed, yawning. You want me to skid? Dare me—it’s gonna take a hell of a lot more than this, and these tires don’t help. Donuts? Jelly or glazed? Now we’re finally having fun with powdered sugar, she said gleefully, sliding as I lost all steering when I tried deliberately to overcorrect and brake hard simultaneously. 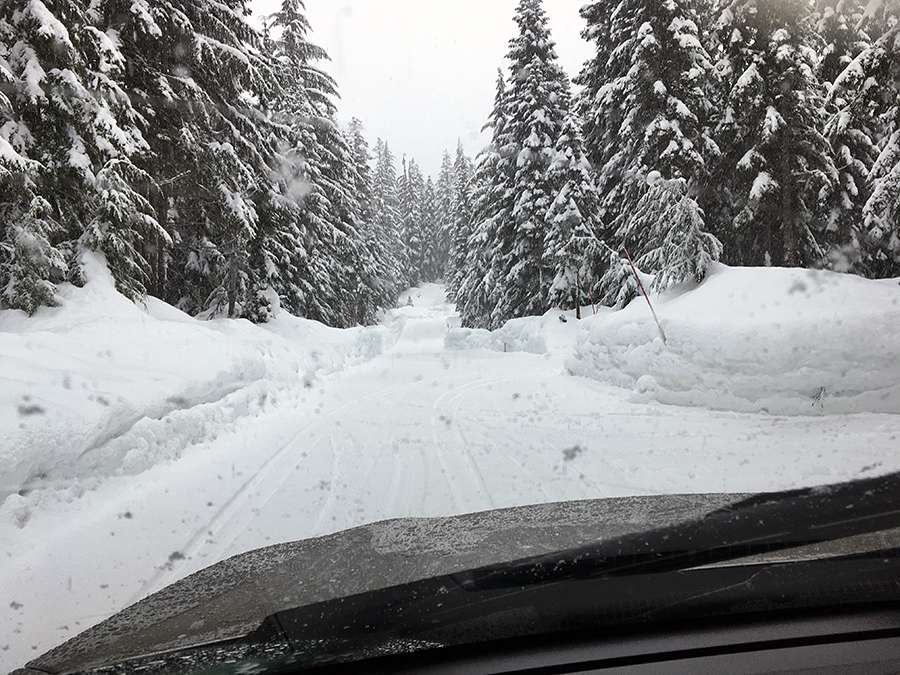 Nelly and I contemplating a straightaway before our braking test. Note the orange poles sticking up to mark driveway locations for snowplow drivers and homeowners alike.

Subarus are known for their legendary traction, having one of the best AWD systems in the business. So I’ll never probably know if her snow prowess is partly because of her AWD or the Hakkas in particular, but one thing is certain: This combination is pretty much unbeatable for getting out of anything, short of our getting hit and pushed down a ravine. This is a decent dress rehearsal for our big event happening in late February—heading out to Wisconsin and driving back to Seattle across the Great Plains and six mountain passes while pulling a fully loaded trailer. The weather could be just about anything at that time of year, and we’re ready for it.

I do recommend that everyone find a safe (emphasis on safe, not just empty) spot to try out their vehicle in the snow, and repeat it every winter before the brunt of the season hits to refresh the body-sense memory. Practice steering different ways, brake hard, and see if you can lose traction or slide. The goal is to find out what your vehicle feels like, how it responds, and how you should respond in turn. Things are almost always improved by gentle inputs on steering, braking, and acceleration—not sudden, harsh ones, which invite lockup and loss of control. Perhaps counterintuitively, applying gentle but steady gas is often a better way to regain control than heavy braking or no gas. And always keep your eyes up on the safe, empty spot you want to go—don’t linger on whatever you don’t want to hit, because you’ll tend to steer right where you’re looking. 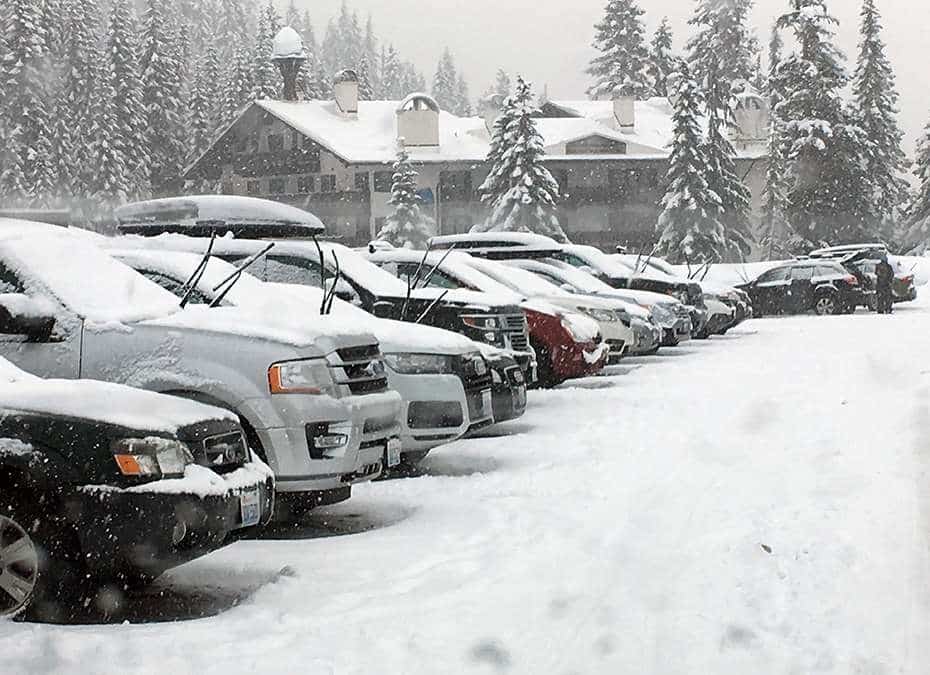 The parking lot at Snoqualmie Summit. Note all the windshield wiper blades left up. See the Safe Driver’s interesting article for more on whether to leave them up or down.

A word of caution: Once you’ve gotten some confidence of how your vehicle will behave, DON’T be stupid with it. Having AWD won’t help you stop any faster—its sole advantage is to help you gain traction from a standstill—period, and nothing more. And just because you have a better sense of how your car will respond in slippery situations doesn’t mean you should drive faster or take more chances. Don’t EVER rely on your vehicle doing the work of getting you out of a pinch when you could have avoided it by planning and looking ahead, keeping plenty of space around you, being cautious, devoting your full attention to the road, or maybe just not going out in bad weather in the first place.

The value of knowing how your car will steer, brake, stop, and go in less-than-favorable conditions is that you’ll feel less afraid and you’ll have another tool to draw from should a situation—or someone else—force the extreme. And if you don’t have winter tires, go get some. Now. You won’t be sorry.